Fascinating report from Author Earnings (see here). In the traditional publishing world, the reaction to that report was rather negative (according to the UK Guardian), putting into question the methodology. But even taking into account all the limitations of this report, it still reveals a lot about about Amazon, keeping in mind that 120,000 books included in the report comprise approximately 50% of Amazon e-Book revenue and that Amazon’s own publishing ventures (five imprints) account for only 6% of the total, a surprisingly small share compared to 38% of the “Big Five” (legacy publishers):

OK, Indies account for 31 percent. Fascinating but at the same time frightening: remember, we are dealing here with JUST 120,000 titles (so, out of those, some 40,000 titles are indies) But this is out of a total of how many books in the Kindle Store, 3 million? 4 million? I’d love to know.

Assuming it’s somewhere between 3 and 4 million, that means less than 3% float to the surface and get bought, perhaps even as little as 2%.

The other frightening aspect of this (otherwise brilliant) analysis is the focus on rankings. It really confirms that there are no quality gatekeepers on Amazon, number of sales rule the day! Sales beget sales, historical sales keep a book floating for several weeks, and when sales dip for too long, the book sinks out of sight.

Sales numbers decide whether a book shows up or not in any reader’s searches.

I perfectly understand the logic but I deeply regret it.

It means that numbers trump quality.

Readers navigating Amazon will keep seeing the same books over and over again. If you’ve got a book that doesn’t hit the #100 rank, there’s no hope for you. None whatsoever. Because it means you have no Internet presence, not enough fans to buy your books together at a given point in time so that the ranking is boosted up. Authors with fans acquired in a previous existence as a traditionally published “mid-list author” have an obvious head start in this rankings game, no question about it, and that head start is decisive.

Good for them, but if you’re a newbie, never published before by a trad publisher, beware!

If all this notwithstanding, you do decide to jump into self-publishing, then the two genres that you should write in to have any hope of success, according to this report, are romance and science fiction/fantasy – but especially romance, look at this amazing graph: 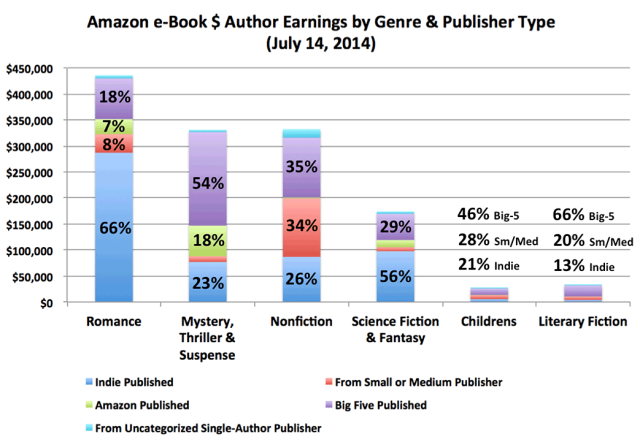 Yes, on Amazon, the “Big Five” only seem to do well in thrillers and non-fiction. Thrillers also happens to be the area where Amazon imprints do best. However, for non-fiction, children’s and literary fiction, Amazon imprints are no match to the Big Five, they literally disappear…

Broadly speaking, literary fiction and children’s fiction don’t make the cut on Amazon, it would seem that both kids and persons who like literary reads need printed books from legacy publishers to be happy (I can’t say I’m surprised – that makes sense; ebooks are only good for quick reads when traveling or waiting at the dentist’s).

Of course, all this data needs to be taken with a grain of salt (we know nothing of the rest of what’s on Amazon – from where exactly the other half of Amazon earning stems from, and of course, Amazon won’t tell).

This puts the battle between Hachette and Amazon in perspective, doesn’t it? Some of Hachette authors are surely hurt but it is likely that many are NOT suffering all that much because the majority of their books are not sold in the Kindle Store…

Still, I am shocked that the whole analysis hinges on only 120,000 titles…Your views?