There’s hope for recognition for all of us poor writers… The lesson is: never give up, keep trying!

That’s what  Irish author Eimar McBride did, she never gave up and this week-end the news came in: she just won the Baileys Women’s Prize for Fiction for her debut novel, “A Girl is a Half-Formed Thing”.

That in itself would perhaps not be so remarkable, after all, it’s a damn good title and universally considered to be “well-written, the work of a genius”, if it weren’t for the fact that Ms. McBride has spent nearly a decade trying to get published!

You read that right: almost 10 years trying…Yes, that’s true determination for you! She was finally published in the UK by a small independent press and her book will come to the US in the fall, published by Coffee House Press. If you go on the website of her publisher, you discover it’s an australian publisher and while her book is among the top ten, it is ranked…number five (but they quickly featured the book cover on their site – I love it!): 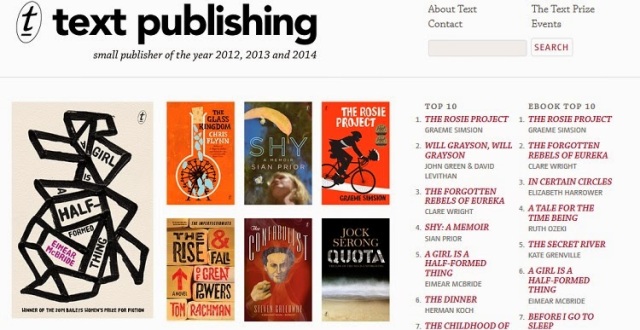 And to think she has beaten in the short list big name novelists like Donna Tartt, Chimamanda Ngozi Adichie and Jhumpa Lahiri…

Really a good reason to smile:

She wrote the book in 6 months when she was 27 and took all this time – she is now 36 – to get it published. Why? Because, as she told the BBC, publishers liked her writing but saw unsurmountable marketing difficulties, her book didn’t fit into a “niche”.

I haven’t read it, but it’s reportedly written in an unusual stream-of-consciousness style that takes you into the character’s head and the subject is certainly harrowing: all about a young girl growing up in Ireland in the 1980s, going through a difficult relationship with her brother affected by a brain tumor in childhood. Add sexual abuse to the mix and you have a winner! Helen Fraser, chair of judges, said of McBride’s startling novel: “An amazing and ambitious first novel that impressed the judges with its inventiveness and energy.  This is an extraordinary new voice – this novel will move and astonish the reader.”

And plenty of money is showered on the winner: a £30,000 prize plus the bronze statuette – in this case, well-deserved.
Fortunately not at all like the ending in Edward St Aubyn‘s brilliant new novel, Lost for Words (no spoilers, I won’t tell you how it ends but it’s very funny). That book bashes literary prizes in a hilarious way and it is clearly a “roman à clefs”, with references to real people, no doubt celebrities that I cannot fathom not being into the London literary scene. But of one thing I’m certain, “Lost for Words” makes no references to the Baileys – it is more likely a bashing of the Man Booker Prize…

I love that cover too…
So, I’m bringing you good news. While it’s true that literary prizes have problems as St Aubyn so brilliantly and entertainingly points out, they can also make the difference in a writer’s life…Congrats to Eimar!