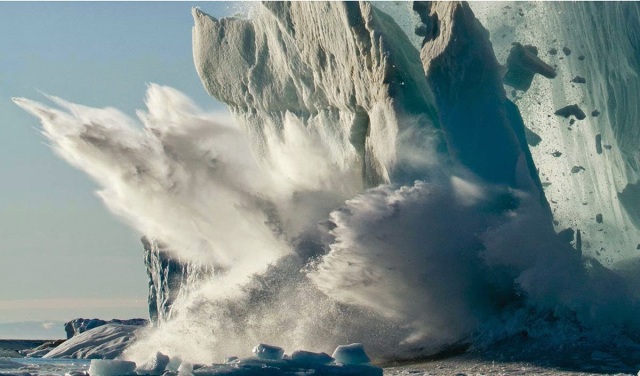 Climate fiction has gone viral for a very simple reason: it deals with climate change and global warming, issues that are getting worse every year. We’ve been used to dire reports from the United Nations Intergovernmental Panel on Climate Change for years but now we are getting one, equally somber report from the United States, long the homeland of climate change deniers: the National Climate Assessment, done with 300 experts. It’s full of information and has some amazing photos (like the one above illustrating the collapse of ice sheets – now on-going in Greenland and Antarctica and adding to sea level rise – photo source: Paul Souders/Corbis).

Things have never looked so bad, and it’s not happening in some distant, unlikely future but right now.

The New York Times reported on it (see here) and got some 1300 comments in  just a few hours. One of the commentators (who also happened to be a climate scientist living in Seattle) noted: “We are well on our way to the 6th mass extinction. Shelled animals in the waters off the coast of the Pacific Northwest are showing damage from the ocean’s acidity. Unfortunately, people don’t get into gear when they hear doomsday pronouncements.” (highlighting added)

It’s hard to imagine, hard to go beyond the raw numbers and the (cold) data (or should I say hot?).

And that’s precisely why we need climate fiction – because it works on the emotions.

And when you realize the problem is here and now and concerns you, well, it’s normal, it makes you sit up!

That’s why Nathaniel Rich  cli-fi novel Odds Against Tomorrow was eerily spot on. He had imagined New York under water. When his editor at Farrar, Straus and Giroux was finalizing his draft for publication, hurricane Sandy hit New York and all of a sudden, Rich’s book didn’t at all look like fiction, it looked like social realism! 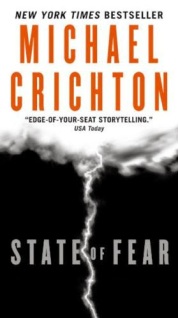 We have certainly covered ground in 10 years!

Think of it, one book by a best-selling 20th century author that was in fact a disruptive and much talked-about climate fiction novel (though it came out in 2004, fully four years before the term cli-fi was coined by Dan Bloom) depicted climate activists as…”eco-terrorists”! Yet it was undoubtedly climate fiction: climate change was its central theme. I am speaking of course of Michael Crichton’s State of Fear

This illustrates well how broad a genre climate fiction really is, if it can include a book that is music to the ears of climate deniers. Because that is my point: climate fiction, whether you are denying climate change or believe in it, is here to stay – a constant source of inspiration for writers.

I would  also like to add that climate fiction inevitably will include books that go beyond climate change.

Why? Because climate change is but one of the negative trends that will affect our future. The others are well-known and nobody disputes them: an unstoppable population explosion, rapid industrialization especially in developing countries, a world-wide rush to urbanization, increasing income inequality causing social tensions, the multiplication of local wars as weak states struggle to politically emerge and mature in working democracies.

The main point here is that all these trends are inter-linked and interact on each other, reinforcing each one. For example, industrialization of itself wouldn’t be so devastating if it wasn’t accompanied by rapid urbanization and rising population, etc etc.

So if you try to look at the future and figure out what awaits humanity in the long run, you have to take into account not only climate change but all the other trends as well – which is what I tried to do with my new serial novel Forever Young (Part One and Two are out, Part Three will be released next week.)

How well I’ve explored the future, how realistic it is, I leave it to you to judge! But do let me know what you think – the future of humanity is one of the most important issues facing us all. Your views? Do you think writers have a role to play?